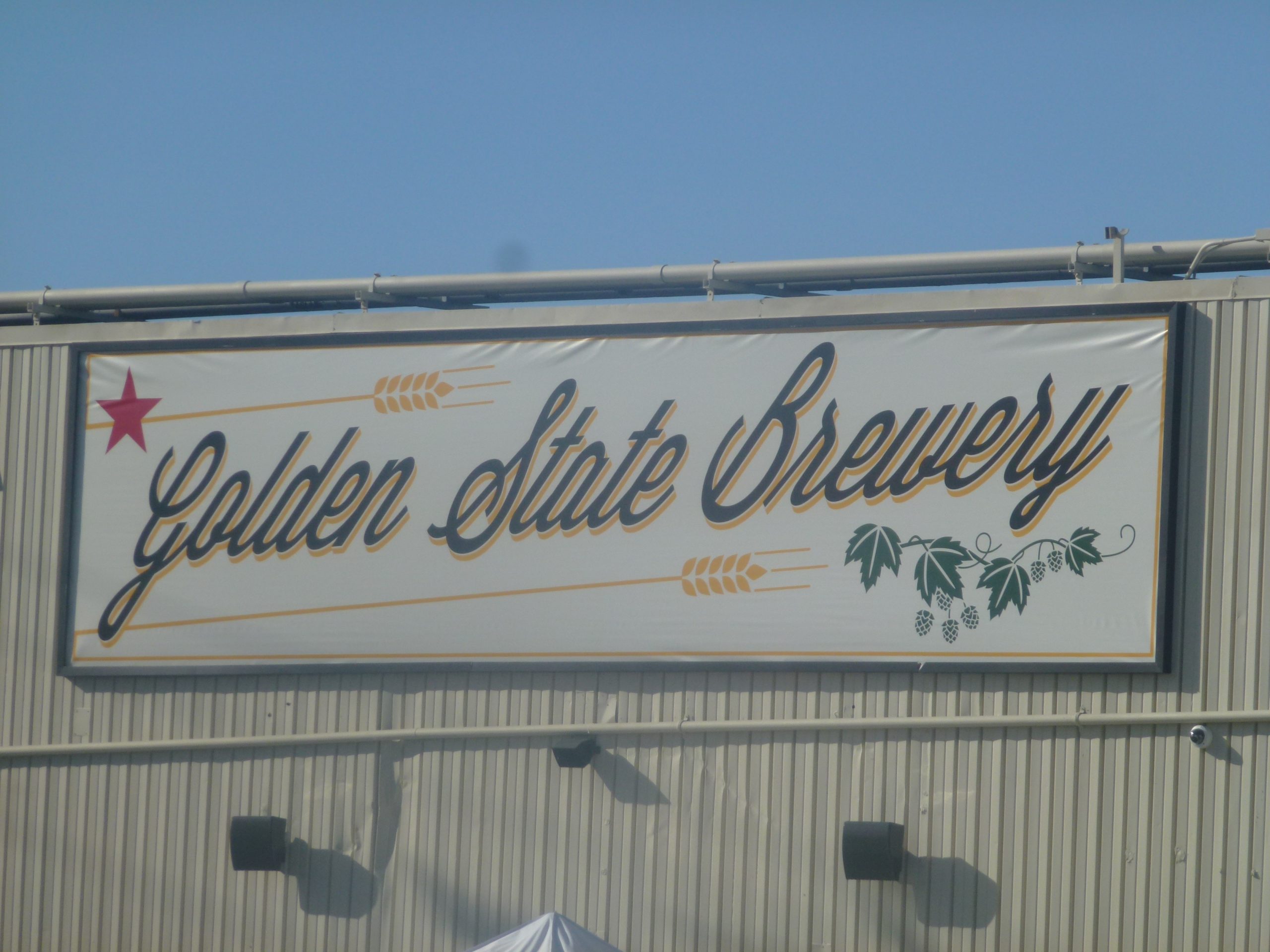 Walking into Golden State Brewery for the first time I was impressed at first sight.

Never mind the proximity to the railroad tracks and the industrial setting (most craft breweries tend to reside in tucked-away locations like this anyway). A few smiling fermenting vessels, happy to contain the deliciousness inside, greet patrons upon entrance. In fact, the seating area is snuggled right next to the brewing operation, so connoisseurs can further appreciate the brew being enjoyed. Pleasingly, the place doesn’t smell “yeasty” or like a bar as other breweries can, which means you can sit and enjoy your beer a while longer.

Behind the bar, friendly staff pours craft beer in front of dozens of old-school California license plates sporting the vintage black, blue, and occasional sunset designs (a really cool idea). The bar itself is made of a rustic hardwood that helps bring outdoor Cali inside. With only a handful of tables scattered throughout, the brewery feels open, but cozy enough to have a conversation.

Golden State Brewery has awesome beer and you can enjoy all six in their sampler. Each beer is unique and taste like it should for its style. You’ll have to go on our tour to taste them all, but I’ll say my favorite is the Golden Gate Red–a smooth and interesting red ale with a nose that intrigues the olfactory nerve then delights the taste buds.

Another favorite of mine has to be the Eureka! IPA which offers up 90 IBUs and packs a powerful first sip. After the tastebuds settle down, the nuances of citrus and sweet round out the finish. A must try for IPA lovers.

Golden State Brewery is definitely worth checking out, if not for their welcoming and pleasant environment, then for their delicious take on classic styles which lend to the Santa Clara Valley’s innovative culture.

Coconut IPA From Fieldwork Does Not Disappoint

One of my best friends lives in the San Francisco Bay Area. Whenever I visit, we always visit the latest microbrewery to pop up. Some time last year, I met him and a few other buddies at Fieldwork in Berkeley, California for a rainy-day beer hop around the East Bay. Fieldwork was our meetup spot.

After arriving, I was pleasantly surprised to see a very open, family-friendly atmosphere. Small kids were toddling around, while we adults treated ourselves to tasty craft brew. I downed a couple beers, enjoyed great conversation and was ready to move on to the next spot. Nothing really stood out to me then.

Fast forward to 2018 and my opinion of Fieldwork has changed completely. Now I can’t wait to get back to The Bay and try to see what they have on tap. What changed over just several months? I had a chance to try the best coconut beer in the world: Coconut Milk Double IPA.

I tried Coconut Milk for the first time at small place in San Francisco called The Crafty Fox. Once my friend saw it on the menu, he immediately recommended I get it. I was hesitant at first. Being lactose intolerant, any mention of milk and my stomach churns (luckily I carry lactase pills). Besides, other coconut beers I’ve had before were dark, heavy and thick–something I don’t really want to drink as a first beer of the day. My friend assured me it was different than any other coconut beer I’ve had. He said, “It’s even better than Maui Brewing’s Hiwa Porter.” With that kind of billing, I had to try it.

I never had anything like it before. From the full aroma of toasted coconut to the fresh taste of the sport to the lightness of the water, it was like eating and drinking a fresh coconut! Drinking it took me back to walking the swapmeet grounds in Honolulu while sipping out of a fresh coconut.

The most profound experience was in the hops and the alcohol. It was a double IPA afterall. The 8.6er was extremely smooth to drink, yet the hops lended a bitterness that rounded out each sip and brought the coconut to the forefront. Some doubles to me can be overdone with bitter and the sweet to cover up the big alcohol making for a terrible contrast on the palette. The Coconut Milk bucks that trend and offers enjoyable flavor and aroma throughout the entire beer.

I love Coconut Milk so much, I ask for it every time I’m in a taproom or at the store. Hopefully I’ll request it enough that folks will start to carry it. If you’re reading this and know where some Fieldwork Coconut Milk is available, please send some my way. If you can’t (or won’t) do that, then please enjoy one for me and leave a comment about it below.

I grew up about 30 miles away from where Firestone first started its venture into craft beer. I remember my dad drinking Firestone Double Barrel Ale in the mid 90’s. It was one of the few craft beers he could find in Lompoc. He would bring a sixer backpacking on the Davy Brown Trail for enjoying the chill night air. When he opened Mad Mack’s BBQ & Grill, Firestone DBA was the first beer he listed on the menu. So naturally, when I came of age and could appreciate craft brew, Firestone was my first choice.

During late May in my part of the desert, the weather starts heating up, but a cool, gentle wind blows from the East. A little bit of moisture can still be felt in the air as the dry summer sweeps through the valley. Trees and flowers are in full, vibrant bloom. Birds chirp off in the distance, while propeller planes hum parts of the city to an afternoon snooze.

Sunny days like this drum up memories of growing up on the Central Coast of California, riding “the jumps” at the riverbed, hiking to Manzana Schoolhouse and grubbing on some fall-off-the-bone ribs. Ahh…The Good Ol’ Days…

After living in Las Vegas for a couple years now, I tend to drink lighter beers in the summer. I still shy away from the macro lights since something about their quality literally makes my stomach churn and can throw my day off. Besides the local Sin City Light, one of my other favorite light beers, although not out of Las Vegas and not as micro as most craft brew houses, is Firestone 805.

At just 4.7% ABV, it won’t dehydrate me like some of my go to IPAs, yet it still possess some flavor, a slight bite and a smooth drinkability that makes it great for a backyard BBQ or chill smoke sesh with friends.

Since I’m a Cali kid heart and Firestone brings back memories from long ago, I’ll always have a spot in my fridge for their beer. The best part is, whenever I want to go back to the Central Coast and reminisce, an 805 takes me there.